Usher, Will I Am, Black Eyed Peas 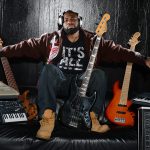 I’m very happy to announce my latest endorsee, André Bowman. André is currently playing bass with Usher. He also plays with Will I Am, Black Eyed Peas.

“Dré has established himself as a well-recognized, multi-talented bassist, producer and songwriter. His musical journey started at the early of age 7, leading him to influences such as Jaco Pastorius, Marcus Miller, Verdine White and Louis Johnson. In 1995, Dré enrolled at the prestigious Berklee College of Music to study music synthesis, production and engineering. During his time at Berklee, Dré honed his skills not only as a performer, but also as a producer, programmer and sound designer.”

Used the new bass head on a gig for the first time Saturday… so killin! Super clean!